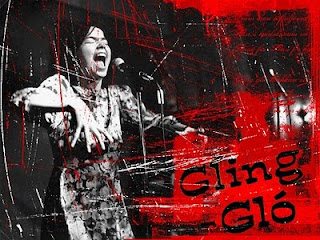 In 1996 I was living in Warsaw, Poland and met a Belorussian linguist. It was the first time I had considered doing something with my language skills besides just tacking on new languages. He spoke Russian, Polish, English, German and was working on Icelandic. To say the least I was extremely impressed. He left two indelible marks on me. First, I became a Linguist instead of just a regular old English Lit major, and second he gave me a taped copy of Gling-Gló of by Björk Guðmundsdóttir.
I had already been a fan of The Sugarcubes and Björk for a long time, but finding out about her 1990 Icelandic jazz release sent my head spinning. And I guess this is as good a time as any to tell my Björk story.
While I was living in Warsaw, I had a flat in Bank Square, just above a movie theater. One day as I was walking back home, I saw this peculiar girl sitting on a bench out in front of the theater. Something seemed familiar about her, but after a year and a half abroad I'd gotten used to recognizing people who weren't at all who I thought they were. So I had my friend slow down with me and walk gingerly toward her. Then, I realized that it was Björk . Knowing her nature I didn't want to spook her so we walked very, very slowly past her. Once I was positive it was her I turned around and walked toward her again intending to talk to her, but she seemed to realize I knew who she was and she darted off into the crowded square. So, no, I sadly never met Björk , but she did sit on the bench outside my apartment once, and that's probably as close as I'll ever get.
I remember reading somewhere that Björk got started singing by hanging out while she was very underage at jazz clubs, performing there on occasion, then eventually started her own girl punk band. So, while to those of us who thought jazz was a strange way for her to go, it was actually the most sensible musical move she has probably ever made.
SONG OF THE DAY: "Brestir og brak" - Björk
Posted by digestibletrax at 8:41 AM