So, last night Mr. IMo? and I went out for a bit of what we like to call "mandatory fun".
I can't really explain coherently how his office is set up, because honestly I still don't see how all the parts relate. Anyhow they are having an inspection of a bunch of different offices this week, and the main guy doing the inspection is the second in charge, but think more 3 star General scary than Vice-President; this guy has power to bring down fire and brimstone on the whole organization if he so deems appropriate. So, he's totally the guy you want to go hang out with after work hours for dinner and drinks, right? You see the irony.
Anyhow, that was the premise for "fun" last night. I think there seems to be cruel joke running however, that when these upper management types come out the food gets progressively worse the higher ranking the visitor. It's like, well we have to show up anyhow so let's see what we can get by with. It's an abomination what we paid for a few thin slices of chicken, some alfredo pasta and over-boiled mixed veggies. I mean, that's our "starving student" staple. It was pathetic.
So, this morning I am feeling the side effects, since I skipped lunch yesterday expecting the decent meal I paid for. I am ravishingly hungry, like a wolf. 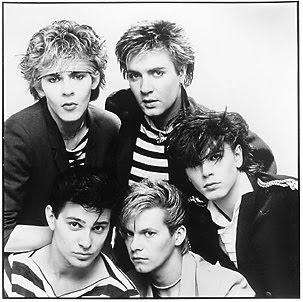 ....
Ah, Duran Duran. I am young enough that I didn't have to a declare a "favorite" member of Duran Duran, with their poster on my bedroom wall( but if you really want to know it's the bassist John Taylor-dark hair, farthest right). I have seen "Barbarella" and know where the band got its name. I also know that Stephen Duffy made a huge strategic error in leaving the band so hastily, (although without his break away we wouldn't have his 1985 masterpiece "Kiss Me"). I also like their side projects, Arcadia in particular.
So here is today's song, from Duran Duran's second album, Rio, and the video that put Duran Duran on the US charts in 1982 thanks to heavy MTV play.
SONG OF THE DAY:
"Hungry Like The Wolf" - Duran Duran
As a special treat I am going to give you a second video link to a more modern performance just to show that these guys can still pull it off, and leave you tingling from their greatness. HERE
Posted by digestibletrax at 7:28 AM