Oh man, it's that time already.
This morning my little Katydid tried to pull a fast one on me.
She has a pair of high heeled dress shoes (that I didn't buy for her) that have a number of restrictions on when she can wear them, which basically comes down to me being in a very generous mood and they match what I have picked out for her to wear for the day.
Katydid is no where near old enough in my opinion to be wearing heels of any sort, so every time a pair of these shoes comes in the mail it is a battle.
Today she took it to a whole new level and tried to stash them in her backpack to wear at school.
And I found them.
For a very honest little girl this was a surprising move, so I had to pull out the big guns. The shoes were thrown in the trash and we had a bit of a lecture wherein I created a very slippery slope of lying about shoes to being a homeless teenage runaway junkie. Possibly a bit over the top but it was Red Ribbon Week at school two weeks ago and the idea that drugs are bad is fresh in her little mind. And she has seen me stop to give food to enough filthy, haggle-toothed, homeless meth addicts and drunks over the years to understand what that's all about.
Even while I was spinning this wild scene of moral decay for my wide-eyed girl, I could hear Henry Rollins anguished voice screaming "'cause I'm a liar!".
Poor thing. I think I scared her. But hopefully she won't again attempt to be a big fat liar. 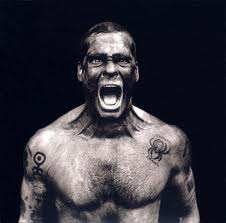 And I must say, you really have to watch the video because Henry Rollins makes a very buff Clark Kent/ Superman with his devilish smile. AND I like his Einstürzende Neubauten tattoo. (EN is currently touring the US)
SONG OF THE DAY:
"Liar" - Rollins Band
Posted by digestibletrax at 7:48 AM