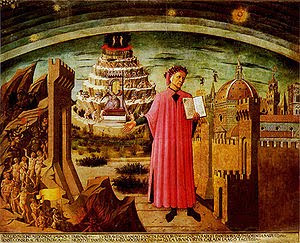 In December I lined up a row of books on my shelf that I determined to read this year. Last year was kind of a lazy year reading wise, mostly Young Adult fiction series like Eragon, The Hunger Games, The Percy Jackson & The Olympians, some modern detective novels and a bunch of Jane Austen since I had never read her stuff before (shh, a girl english lit major should never ever admit that).

The first book I decided to tackle is The Divine Comedy by Dante Alighieri. Part of the reason I chose it first is because I want to read The Dante Club by Matthew Pearl, but really wanted to be up on my Dante before hand. Please don't hate me if I say this, but I am totally getting into The Divine Comedy. If you don't know or remember, the book is in 3 parts : Inferno (Hell depending on the translator), Purgatory and Paradise. I am currently on the 10th Canto or chapter and love it. It took me the first two chapters to really get accustomed to the translators style, and figure out the flow and really make use of the strategic commas. My copy comes from the Harvard Classics Collectors Edition with translation by Henry F. Cary.

I read John Milton's Paradise Lost in high school, which is a similar theme, but never read Dante. If you haven't ever read it, don't be scared. It's a little more difficult to follow than say, Shakespeare, but not much, but equally interesting. The combination of Greco-Roman mythology with a Catholic Christian view of the bible, heaven, hell, and the Trinity and creates an other-world with interesting characters to fill out the story. Dante also throws in a number of contemporaries he gets to create punishments for (who doesn't want to create their own hell for people who have offended you or committed egregious wrongs against your society?).

My favorite layer of hell (can you have one of those?) is his interpretation of those being punished for carnal sins who are "tossed about ceaselessly in the dark air by most furious winds" because they were unable to remain steadfast and "to this torment sad, the carnal sinners are condemn'd, in whom reason by lust is swayed". For an intellectual like Dante throwing reason to the wind because of an inability to control the physical being, the punishment fits the crime.

So, to go along with The Divine Comedy, I went in search of some music that would have been contemporary to Dante Alighieri in the 14th century. Most of the madrigal music of the time does not survive but works by Jacopo da Bologna do, and from him comes today's song.

Posted by digestibletrax at 7:40 PM