tapes for tuesday: a series part 8 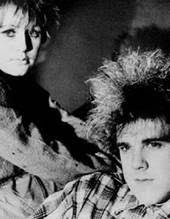 Cocteau Twins started out way back in 1982, though I didn't catch on to them until about 1990. They hail from Scotland and named themselves after an obscure song by Simple Minds.

Head over Heels, their 1983 sophomore release, sounds little like their debut album Garlands. According to the band everyone always expected them to remain sounding the same, but because Garlands was made out of naivete and lack of knowledge, the sound and feel couldn't be replicated.

The track list:
When Mama Was Moth
Five Ten Fiftyfold
Sugar Hiccup
In Our Angelhood
Glass Candle Grenads
In the Gold Dust Rush
The Tinderbox (of a heart)
Multifoiled
My Love Paramour
Musette and Drums

One of the interesting things about Head over Heels is that is was the first of just two studio albums out of the entire discography, that was created with only Elizabeth Fraser and Robin Guthrie. A daring move, in my opinion to downsize on a second album. However, the results didn't suffer, and some classic stuff came off this album.

Posted by digestibletrax at 8:34 AM