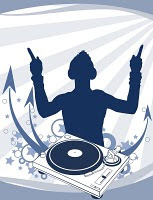 House Music is technically before my time, I was more into the rave scene in college in the early 90s, but there was a lot of musical cross-over and characterized by costuming, props and makeup. It was like a relaxed, happy, equally underground alternative version of punk; a different way to dance out your stress. Where I lived, our raves were always after-hours parties, starting at about 2am, sometimes in an established venue but often in less legally sanctioned establishments like parking garages, often rotating, and sometimes you'd follow the map out to the desert only to find that the party never started or moved.

If you are of a younger generation and/or unaware, it is worth your time to research some of the Rave/House Music. It's an alternative way to infuse a lot of sampling in a very un-rap/hip-hop way. Think if it as a sort of "mash-up".

Today's song of the day is per the request of A.E./D.C., an old college friend, fellow raver and music enthusiast. The song samples Johnny Marr's guitar, how can it go wrong?

as bonus listening for Soho, may I also offer up "Hot Music" with a sampling of jazz master Winton Marsalis' "Skain's Domain" and their more well-known "Birds Fly (Whisper to a Scream)" a cover of Icicle Works (these guys need a post of their own) that was on the Scream soundtrack.
Posted by digestibletrax at 7:12 AM