tapes for tuesday: a series part 6 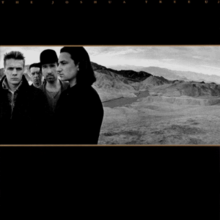 U2- The Joshua Tree

Last week while Mr. IMo? was living it up in Las Vegas, spending his nights eating $6 super-meals at casinos and locked up in fancy meetings during the day, I was holding down the domestic front through a nasty blizzard, day after day.

I decided to be productive while on winter lock-down and thrown down a fresh coat of touch-up paint and listen to some U2. However, I sort of cheated because I pulled out my vinyl copy instead of the tape since the quality is 10 times better, but nonetheless, listened to the whole things a few times.

U2 used to be a favorite, when I didn't know better. Not to say that I don't think that their early stuff isn't good and wasn't original. At the time it was; to me and many others (and this is the big "but"), but they just didn't stick with me. They were just a friend I sort of liked and didn't miss when they were no longer around, yet always remember.

When we got married Mr. IMo? had a very, very tiny music collection. Not at all his fault. While he was living in South America in his early 20s for a few years his younger brother pillaged his stuff and sold just about everything. There were like 5 tapes left and 3 of those were U2. I still don't know exactly why they remained but I have a feeling that no matter your musical taste everyone can agree on U2. They have a bit of everything. Some blues, a little rock'n'roll, a whole lot of peaceful world minded revolution. Yet it is that exact combination which they eventually threw away to become mega-stars and completely lost my loyalty and respect (aka the 1991 album Achtung Baby).

Luckily, the earlier work can stand apart from the early 90s nose-dive and The Joshua Tree is truely a brilliant classic album, with the songs individually and collectively showcasing the greatness which once was U2 at their pinnacle of musical success.


SONG OF THE DAY:
"Trip Through Your Wires" - U2 (the harmonica really makes this song)
Posted by digestibletrax at 5:43 PM