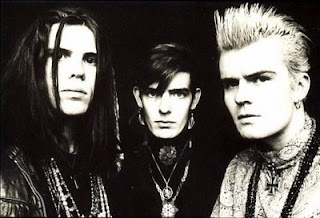 The Cult/ Southern Death Cult / Death Cult has gone through as many musical styles transformations as the change in name might suggest. They started out as post- punk, then took on a more Led Zeppelin style, and then a more hard rock sound. It's all good, in very different ways.

Mr. IMo? and Ian also happen to be related, though I've never met him, so he holds an extra special place in our musical hearts.

SONG OF THE DAY:
"Nirvana" - The Cult

Posted by digestibletrax at 9:19 AM