do you hear the people sing? 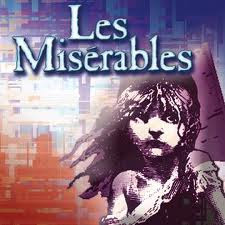 Tonight on PBS the 25th anniversary production of Les Misérables in Concert is playing on PBS.
I don't have even have PBS, even with the digital converter box I don't get reception, so I won't be able to see it.

As much as I like musicals, I stick to old Hollywood and Bollywood, and not so much Broadway. I do however have an old copy of Les Misérables, an International Cast Recording, which I can't find on youtube, so all the individual voices seem off to me. I discovered the soundtrack year while getting an early morning ride across town to summer school each day (so that I could squish in classes I didn't want to waste a full year on like speech and chemistry in favor of pottery and music). The girls from my neighborhood I rode with were obsessed with Broadway musicals so I got an extra summer school class that year: Cats, Les Mis, Phantom of the Opera being the primary focus.

My favorite song, unsurprisingly is the rebel song with a full chorus. For a better story line synopsis head over to Scary Larry's as he just read the unabridged version novel by Victor Hugo.

SONG OF THE DAY:
"Do You Hear The People Sing" - Les Misérables (London Cast performance)
Posted by digestibletrax at 12:44 PM