To shake up this Sunday I decided to go back only 50 years instead of 500 and go with a different type of classic.

"There are two types of people in the world: those who like Neil Diamond and those who don't". - What About Bob?

Neil Diamond has a voice that reminds me of sunny, warm, happy 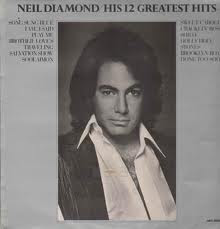 memories with my best friend. When I was little my best friend and I had birthdays just 11 days apart so almost every year we would get together, though we had moved apart, for our birthday. We would go to the beach and collect purple sea urchins, or Marine World, or Santa Cruz Boardwalk. It was always fun, warm and exhausting. Her parents were Neil Diamond fans, and I remember riding in the back seat of their Volvo station wagon with Neil crooning on the 8-track.

Just this past summer I was in Hawaii with Mr. IMo? and we went to go buy tickets at Pearl Harbor on a warm sunny day and the old retired ticket-taker was listening to Neil Diamond. He was impressed that someone as "young" as me knew Neil Diamond, but wasn't really surprised to hear I loved his voice, "All the ladies love Neil Diamond" he said. Quite possibly true. He seems to be a secret crush. His overall 1970s hairy look does nothing for me, but his voice is truly amazing.

Neil Diamond is being inducted into the Rock and Roll Hall of Fame this year, to add to his lifetime of achievements. He is the third most successful Adult Contemporary artist of all time, only behind Barbara Streisand (who he did a duet with) and Elton John. He began recording in the early 1960s through the 1990s. I pretty much only know stuff up until about 1982, but I just bought this silver greatest hit album on vinyl at Goodwill a few weeks ago for 25 cents and it has a few later songs.

So, here is to polarizing opinions (and eyebrows the Jonas brothers can admire) whether you like him or not, Neil Diamond's 1966 hit.

SONG OF THE DAY:
"Solitary Man" - Neil Diamond (1966 version) I like this more folk version