"all you need is now" 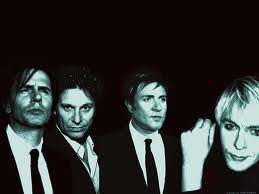 Duran Duran just released their new full length album All You Need Is Now yesterday. The first in ages. And despite the fact these guys first got together when I was still in a car seat, the album is great. Same classic Duran Duran sound but more complex, more layered and less posturing. No longer must they keep at the top of the charts, they have lost their teen idol status but rather have life long fans to impress.

I have to giggle at their last song on the album, Networker Nation, with its speak-and-spell machine spelling out D_U_R_A_N_D_U_R_A_N. Not only will kids not recognize the sound reference, the whole intro is reminiscent of Depeche Mode's first album's ( Speak & Spell ) sound. The two were contemporaries, both putting out their 1st album in 1981 and competing for top of the charts. This may just be my imagination but it seems oddly coincidental. It is a great tune about facebook, a meeting of minds, connectivity and the power of the internet.

Mid-album is a cool tune called "Too Bad You're So Beautiful" which just feels like a perfect Duran Duran song title. They are so much about reflecting back pop culture, beauty and art and in turn recognizing the tragic, lonely, disappointing, complicated side of fame, fortune and beauty. I think it's my favorite of the bunch so far. With lines like "Here I go again, I must have flowers in my brain. The same mistake I made before, but I'm a hostage to that face of yours", "When it starts to rain I'm a lucky man" and "I'm the King of Nothing, it's too bad you're beautiful" the band has captured the essence of themselves in their lyrics. Classic Duran Duran, but not a simple Duran Duran by numbers. Lovely.

But for today's song of the day, we'll go for the opening number, which happens to have a video ready. I am excited about this album. I ordered it on vinyl (since all my Duran Duran is on vinyl) so I am still waiting for the hard copy, but until then I'm listening to my Naspter exclusive version. Also available for instant download at the band's site HERE.

SONG OF THE DAY:
"All You Need is Now" - Duran Duran

Posted by digestibletrax at 7:43 AM