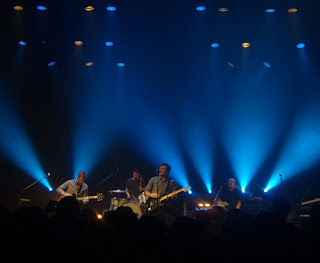 I have gotten a bit spoiled in St. Louis. Most bands that tour the country stop through here, but not everyone. Some play over in Columbia, MO about 150 miles away. When I found out that Cold War Kids was playing a 300 mile round-trip distance from me mid-week an wouldn't be taking the stage until 10pm there were serious doubts about getting there. Luckily a friend wanted to come with us and help cover gas (which I don't need to tell you is crazy this week), his wife kept the little rockers for a mid-week slumber party and the tickets were only $15 so it all evened out. But the best part was that we made it home in one piece after a crazy drove past us in the left lane going 70+ in the wrong direction...we could have been carrion for the vultures, because of the curve in the road we didn't even see the crazy coming.

"Said things could get much worse, natural disasters on the evening news.../ " That line from "We Used to Vacation" was eerily poignant and timely for this particular performance and then my little freeway brush with death left me, well "That [near] accident left everyone a little shook up".

It was a great show. I wasn't thrilled with the opening band, but Cold War Kids were fabulous. And, those boys need to fire their publicist...they are so much more handsome in person than in their photos.

I will do a better write up later this week (hopefully). Right now I need to sleep. I found two version, but I was really impressed by the video below, an acoustic, street-musician version of today's song, which I hope shows how amazing they are even stripped down.

Posted by digestibletrax at 10:11 AM