Month of the Girl Band: Day 24

Sorry I missed the weekend but I was unexpectedly whisked away by Mr. IMo? to Milwaukee to see the Pixies do their Doolittle Tour.

For many many years the Pixies were the band I always wished, but never imagined, would get back together. Then in late 2004 they started tinkling with the idea, and in 2005 they headlined the rebirth of Lollapalooza. I got to see them play and I was thrilled even though I had to hang way back in the crowd because Macaroni was just a baby (I'm talking we still counted his life in weeks). 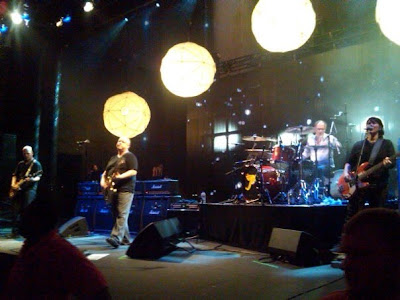 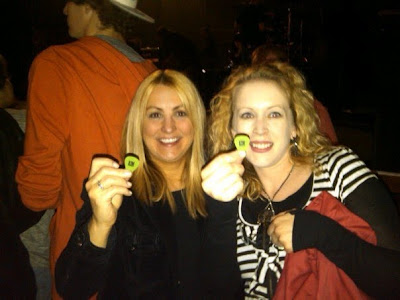 And I was happy.

Then this weekend we drove up to Milwaukee. We actually were staying in a different town so we had to drive an hour to get to the show and were worried that we showed up 5 minutes after the doors opened, but to our surprise we were able to get 2 people back on stage left (the Kim Deal side of the stage). The show started, we could see, and we were happy. Here is where things start to sound like the White Stripes song "Take, Take, Take". There was a huge fight that broke out just behind us, between a really stoned dude and our concert neighbor a Chicago firefighter. The enormous bouncers climbed over the barrier to haul the stoned guy away while we held on to the firefighter's kid, and I filled in the three foot space left vacant along the barrier and joined the front row. After the show finished and 2 encores, it took a while for the very crowded auditorium to clear out. While we waited the roadies started to break the set down the center front rowers got the set lists, and then the roadie breaking down Kim's stuff handed the few of us girls in the front row Kim's guitar picks. I was over the moon. 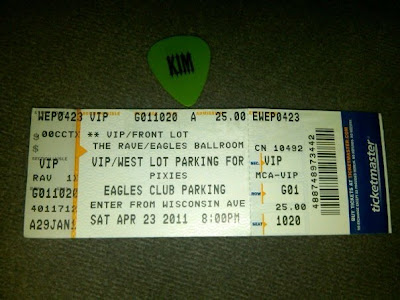 Then my concert neighbor asked if we wanted to hang out after the show to try to get an autograph. Although I was tempted I decided to end the night thrilled I had a guitar pick rather than disappointed I didn't meet anyone, so I gathered my resolve and walked out the door on clouds.

I have always considered the Pixies (like The White Stripes) as much a girl band as a guy band, because Kim Deal is my hero. She does sing a number of songs and does backup vocals on most of them, so in my opinion they count.


I found videos of the Doolittle tour that were all set up like the one I saw so you can get a feel for the show.

The opening band, Imaginary Cities, out of Canada, was pretty good too.


Posted by digestibletrax at 7:16 AM