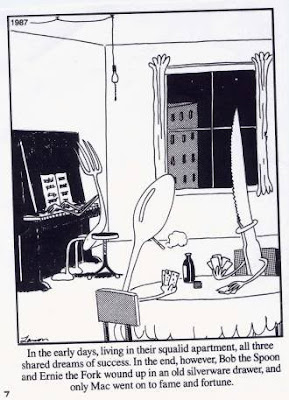 Kids used to spends a lot more time learning to read with drug store comic books and newspaper strips than in primary colored holding pens, also known as preschools.
So, after that day when Katydid was 3 and asked me to spell the names of everyone in our family while I was making dinner, only to find out that she had written it all down, I decided it was time to teach her to learn to read on her own, the tried and true, old-fashioned way: with comic books.
Neither Mr. IMo? nor I are comic readers in the traditional sense, but I spent many years as child labor running a paper route and the only way I could stay awake and fold papers was to have the comics laid out and read one box at a time. For a few years I was very well versed in what was going on with Garfield, The Family Circle, The Peanuts, Cathy and others. Mr. IMo? on the other had had a "boys bathroom", one of those scary places teenage boys never learn to clean, and comic books were a staple. In his family they were Calvin and Hobbes and The Far Side. The childish wonder of Calvin and Hobbes and the simple drawings with layered meaning of The Far side drew in Katydid immediately. We've spent years, first with Katydid, and later with Macaroni reading, re-reading and explaining the comics. And you know what, both learned to read way before Kindergarten, even with Macaroni's autism as a major roadblock.
Last night while cleaning I picked up a copy of The Far Side and found it open the above cartoon and though that it was a perfect monologue subject and inspiration for a Sunday Special.
SONG OF THE DAY:
"Mack The Knife" - Louis Armstrong (any other version is just criminal)
Posted by digestibletrax at 7:19 PM