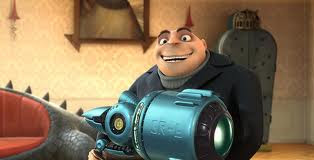 Macaroni has become obsessed with the movie Despicable Me. A not uncommon trait for an autistic kid to pick up on such a fixation, but this time it has actually been cause for imaginative growth rather than introverted play.
This was a recent conversation:
Mac: "Mom I want to build a shrink-ray so I can steal the moooooon!"
ME: "OK, sound fun"
MAC: "But Mom, a shrink-ray is a tool not a toy so I can't play with it. Will you use the shrink-ray and steal the moon?"
"ME: "I don't know how to build a shrink-ray. How about we make a rocket out of paper towel tubes instead?"
MAC: "Ok. A rocket is a toy so I can play with that!"
Well, maybe.
Anyhow, his obsession with stealing the moon has him running around with a caving helmet on his head pretending to be an astronaut and wants to watch space movies, but only the short ones. This old 90's video by Catherine Wheel featuring Tanya Donnelly (of Throwing Muses, The Breeders and Belly) was a hit.
SONG OF THE DAY:
"Judy Staring at the Sun" - Catherine Wheel feat. Tanya Donnelly
Also I just announced my annual playlist contest. Click HERE for details on how you can win a music download gift card.
Posted by digestibletrax at 7:46 AM