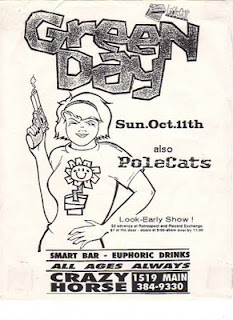 Driving home from the grocery store yesterday, I heard some old Green Day pop up and knew it wasn't a song that was ever played on the radio uncensored, so of course I was still on NPR. Terry Gross was interviewing Billy Joe Armstrong (a repeat, but I'd only heard the 1st half last time).
Green Day will be releasing a new album in March, and American Idiot: The Musical is currently onstage.
They played this past summer at Lollapalooza, and I never got around to doing a post-concert review. Seeing Green Day so many years past their rowdy prime made me suspicious, but I must confess, it ended up being a top 10 show, performance-wise.
Since Mr. IMo? and I did Lolla as a round-trip one day affair, we had to disect the whole day on the way home just to stay awake. When it came to Green Day, as always it lead to politics a bit, since we and the GD boys are all Libertarians. However, chatting about GD lead Mr. IMo? to ask what's my favorite GD? When I answered "She" he was befuddled and when I pulled it up to listen to he admitted to recognizing the tune but had no idea what the words were. For me it was the perfect teenage girl song, and still my favorite song, even though Kerplunk is still my favorite album.
LYRICS:
She...
She screams in silence
A sullen riot penetrating through her mind
Waiting for a sign
To smash the silence with the brick of self-control
Are you locked up in a world that's been planned out for you?
Are you feeling like a social tool without a use?
Scream at me until my ears bleed I'm taking heed just for you
She...
She's figured out all her doubts were someone else's point of view
Waking up this time to smash the silence with the brick of self-control
SONG OF THE DAY:
"She" - Green Day
Posted by digestibletrax at 1:01 PM