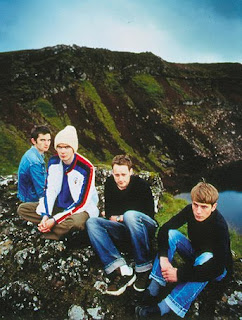 This past week I watched Ondine, a pretty little film about an Irish fisherman (a very scruffy Colin Farrell) and a woman he fished out of the ocean and his daughter believes to be a Selke or water nymph.

One of the major features in the film actually turns out to be the song of the Selke, which, in fact, is not the song of a sea nymph but a very real song composed by the Icelandic band, Sigur Rós.

I really thought I had featured Sigur Rós before now, because I have loved them for so long, but it turns out it was only in passing or comparison. I discovered the Icelandic band in the summer of 2006 when their EP was released in the US. The video for Glósóli actually made me cry the first time I watched, which is highly out of character, but it was the most beautiful combination of story and music, and the gorgeous fresh-faced Nordic kids were simply disarming.

Here is a live version of the two tracks, Takk & Glósóli, back to back. There is a such a flow to the whole album of Takk... that it is best listened to in one sitting.

SONGS OF THE DAY:
"Takk/Glósóli" - Sigur Rós
Posted by digestibletrax at 1:15 PM